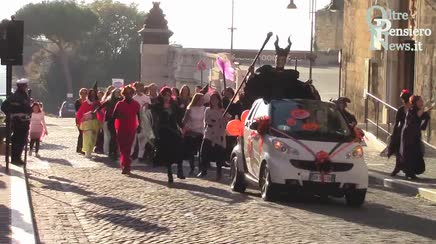 – (Marco Carra) – This recurrence is often associated with witches and sorcerers… actually Halloween is the most important Celtic festival. It’s The Celtic New Year’s day. On the night of October,the 31st, the veil between the realm of the living and the dead thins letting the souls of the dead to come back to visit for a few hours those of the living. The pumpkin, according to tradition, is a kind of lantern that was used to signal the way home to the wandering soul and the gifts represent the food given to the guest who came, so that he could refuel before keep on going on his journey. In Tarquinia, Italy, the celebration of Halloween has taken other characteristics and lasted even three days. A night that lasts three days! Let’s see, in the movie that we propose to you, what happened in the city on the shores of the Tyrrhenian Sea, between the streets of the Inner City and its most important mall, the Top 16.