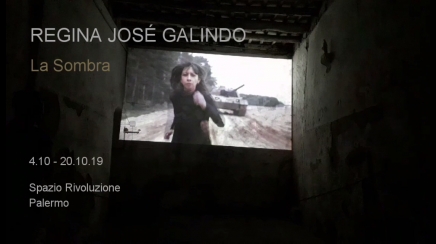 You can’t escape the horror
he chases us
it’s our shadow.
(Regina José Galindo)

For the first time in Palermo, La Sombra is presented, a videoperformance by Regina José Galindo commissioned and used in 2017 by Documenta 14 (Kassel). The work is hosted by Spazio Rivoluzione, an independent exhibition venue founded and managed by Adalberto Abbate.
The art of Regina José Galindo, centered on corporeity, is composed of psychomagic acts that present shared tragedies, overflowing calamities of horror whose weight falls on the social and which the artist takes on by re-elaborating the emotional burden.
A race in a round, desperate, incessant, without beginning or end, stands before the yoke of oppression and abuse of power; an anguishing macabre dance made coercions, abuses and violent prevarications, which immediately take on a universal character.
Pursued by a leopard, a German WWII tank, Regina José Galindo reacts against the uselessness of the male, using gestures and physical presence as a symbol of struggle and resistance.