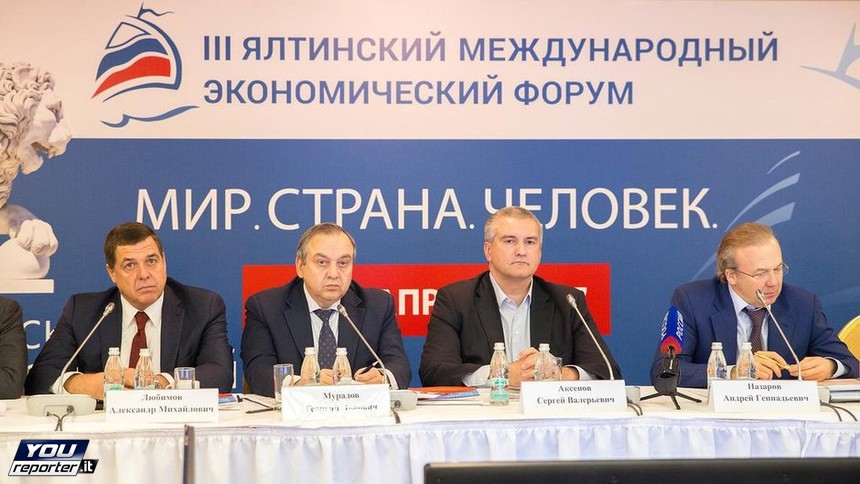 On April 20-22, 2017 the 3rd Yalta International Economic Forum (YIEF-2017) took place in Yalta under the direction of current government of Crimea. It is worth to mention that Russian mass media have provided extensive coverage of this meeting without particular names of foreign guests. It is well-known that Russia and Crimea are under the sanctions, which restrict business activity of non-residents in the Crimea peninsula. That may be the reason why the most part of foreign participants of the forum were trying to hide their presence and avoided to make any statements in these regard. The attention of mass media was attracted rather by contestable status of politicians and businesspersons who visited Yalta forum, than by large contracts and agreement, signed during the meetings.

YIEF-2017 hosted large pool of businesspersons and politicians from Italy, Austria, Turkey, Romania etc. But we have to admit, that all the visitors attended Yalta International Economic Forum as private guests. None of the members of delegations and none of visitors had authority to represent their countries and governments during this forum. All the contracts and memorandums, signed in Yalta, are just private and extremely venturesome deals. It should be noted that neither Italy, nor Austria, nor Turkey or Romania have confirmed Crimea as the region under Russian jurisdiction.

Due to the rules of international public law, Crimea is the territory of Ukraine. In this context, the participation of European MPs Laurentiu Rebega and Lorenzo Fontana in YIEF-2017 and their quite arguable statements about cancellation of sanctions against Russia and Crimea and attracting investments in the region is very controversial act.

The European Union is one of the largest geopolitical players because the EU MSs have always been able to present joined position in regards to international affairs and challenges. Visit of European MPs and their controversial statements about cancellation of sanctions against Russia is quite suspicious. It is well-known that Russia has searched for the ways to cancel or to lift sanctions since 2014, and all methods were good enough for achieving that goal.

No one can deny the fact of direct financial support of marginal ultra-left and ultra-right movements and of euro-sceptics as well, provided by Russia. That’s why it is not a surprise to see the deputy of Italian region Veneto Stefano Valdegamberi and Italian senator Sergio Divina in Yalta. We have to mention that there is serious political movement for establishing autonomy of northern industrial regions of Italy from southern “agrarian” regions. It is obvious that those persons who seek the partition of their own country would support the partition of other states. It remains to be the mystery, how the position of European MPs Rebega and Fontana correlates with the official position of the EU, which does not admit Crimea as Russian territory.

The question is: what was Russian motivation for such different politicians to visit Yalta International Economic Forum?