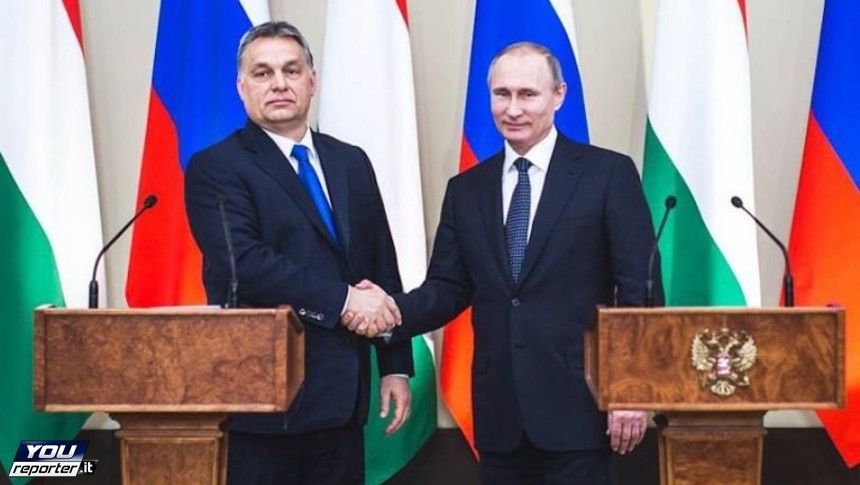 In the midst of increasing political and economic pressure on Russia due to its aggressive expansionist policy the position of some European states, the leaders of which declare unequivocally their dissent from such Brussels’s policy, seems to be quite strange.

Hungary takes active part in lobbying lifting sanctions against Russia, which not only maintains top-level close ties with Russia, but also works for extending cooperation. Specific relationships between Budapest and Moscow are proven by the fact that Hungary became the only European state visited by Putin twice for the last half-a-year.

Frankly pro-Russian position of the Hungarian authorities has quite prosaic reasoning. Hungary depends heavily on supply of Russian energy products. In addition, Moscow peps up quite effectively (through financial means) the interest of Hungary in maintaining close friendly relations. Kremlin’s decision to provide Budapest with credit in the amount of 12 billion euro for construction of the Paks II Nuclear Power Plant serves as the striking example. The amount is quite impressive, isn’t it? The start of the construction with direct involvement of Russian companies is scheduled for January 2018. This scale project will afford Russia not only tie the operation of Hungary nuclear power plant to them and create additional workplaces for their citizens, but also market the technologies in the field of nuclear energy at European level. Obviously, in consideration of the economic support, Kremlin reckons on the Budapest’s loyalty in the issues of foreign policy and lobbying of Russia’s interests on the international scene, particularly in the issue of lifting sanctions.

Moscow not only buys Budapest for credits, but also efficiently uses historical claims of Hungary and growing revanchist spirits inside the state. Current Hungarian authorities have repeatedly declared their intention to turn the lands inhabited by ethnic Hungarians to the “parent body”. This fact unites Hungary and Russia.

Budapest does not transmit such ideas internationally, though they keep stirring up the idea of “Great Hungary” within the state attempting to attract the voters. Similarly to Moscow, in pursuing their aims they stake on strengthening the ties between Hungarians living abroad and their historical Motherland. Certainly, there’s nothing wrong that Hungarian authorities supports in every possible way and provide funds for public organisations, educational projects, infrastructure and medicine development, etc. at the areas of their compact settlement abroad. At the same time the fact that Hungary actively uses the ethnic factor not only for inviting workforce to the state, but also as one of the Budapest’s impact tools on bordering states competes attention. In this context the dual citizenship policy promoted by Hungarian authorities (it happens sometimes that issue of Hungarian passports rises to 100 thousand per month) cannot but cause concern of the authorities of neighboring states. Setting the pension registration mechanism for those citizens living abroad, Budapest gave an impetus to this process which resulted in aggressive growth of the number of ethnic Hungarians who have dual citizenship in Romania, Slovakia, Ukraine and Serbia.

All this happens amidst the growth of extreme right, pro-Russian and Euro-skeptic spirits as well as the government’s support of nationalistic Hungarian organisations abroad. Hungarian nationalists are the primary driving force for the implementation of the idea of “Great Hungary”. Particularly, they are actively committed to granting Hungarians the autonomy within the areas of their compact settlement in Ukrainian Zakarpattia, Székelyföld in Romanian Transylvania, Danube regions of Slovakia, Vojvodina in Serbia. Hungarian imperial ambitions stirring up by Kremlin, as well as growing autonomist aspirations among the Hungarian minority aggravate the outlined negative trends in the EU (British Brexit, reinforcement of the Rights in France and recent Catalonian demarche).

With due account for these conditions, as well as for Kremlin’s involvement into the destructive actions focused on disruption of the EU and NATO unity, the friendship between Budapest and Moscow does not seem to be so harmless.