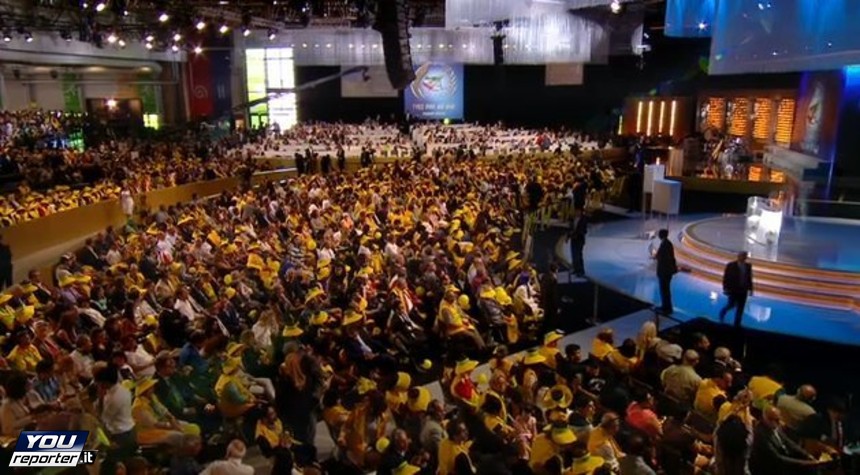 An annual rally of the Iranian Diaspora staged each summer in France this year found its way to the Bourget convention center in Paris on Saturday, July 9th, demanding regime change in Iran. The massive crowd and the prestigious dignitaries lashed at the international community failure to establish a firm stance against Iran and its crimes inside the country and abroad.

Event organizers reported an attendance of over 100,000 people at the eye-opening grand gathering. The crowd went wild with the entrance of Iranian opposition leader Maryam Rajavi as she delivered a powerful speech calling for landmark changes in Iran.
The international community should not justify cooperating with Iran’s notorious Revolutionary Guards Quds Force under the pretext of pursuing the war against Daesh (the Arabic acronym for the self-proclaimed Islamic State, ISIS or ISIL), she said.
The West should begin correcting its policy vis-à-vis Iran, Rajavi explained, adding this represents the sole and most important solution. The international community should once and for all begin recognizing the Iranian people’s right to over throw the mullahs’ regime in Tehran, she added. This will most definitely lead to a major opening for the entire region.

The National Council of Resistance of Iran (NCRI), being the main Iranian opposition organization, organized the rally and rolled out the red carpet for hundreds of prominent and influential figures from America, the European Union member states, the Middle East and beyond to show an unprecedented wide variety of viewpoints willing to rally behind one common cause: a “Free Iran” after an end to the nearly four decades of human rights violations, terrorism and Islamic fundamentalism brewed by the mullahs in Tehran.

Ambassador Phillip Crowley from the United States said that he would like to see the Iranian people put so much pressure on the regime that they cannot control and contain. He said that his fellow colleagues in Washington would also like to see a change in Iran. The government is realistic that this is not going to happen immediately, but they will try to encourage change where it can.

Amir Basiri is an Iranian human rights activist and supporter of democratic regime change in Iran. Follow him on Twitter: @Amir_bas