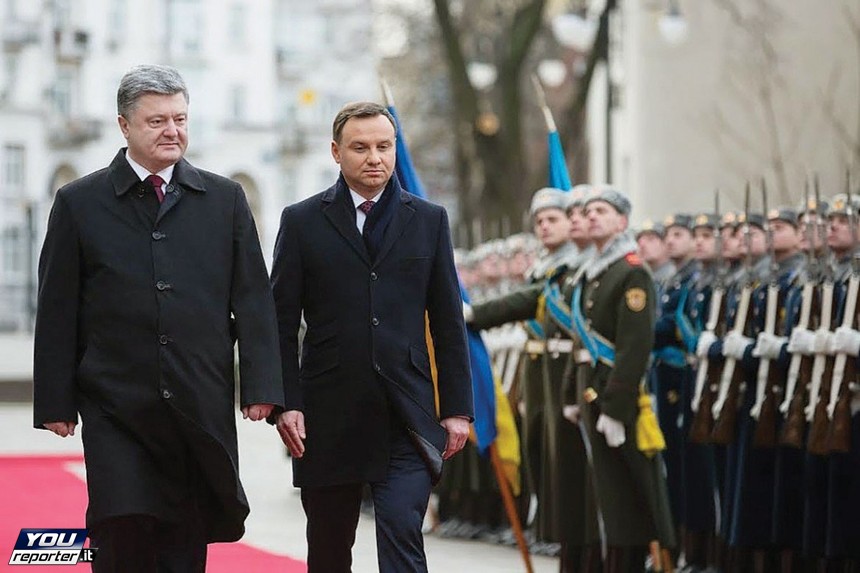 Almost a year ago, on July 22, 2016, Polish Sejm adopted a document which called bloody events of 1943-1945 in Volhyn a genocide of the Poles. In the light of Russian military involvement in Donbas and the Crimea annexation, the fact of submission of a relevant resolution to Polish Sejm and subsequent voting results thereon set us thinking about who will benefit from dissension between Poland and Ukraine and who is interested in setting Ukrainians and Poles by the ears.

After the collapse of the Soviet Union and breakdown of the socialist system Poland and Ukraine had a possibility to build up their relationships irrespective of Russia. Despite of existing discrepancies and contradictions, two states have managed to achieve notable success in development of mutually beneficial relations. However, back then nationalistic radical groups in Poland not without outside help launched anti-Ukrainian campaign in Poland. The start was put by declarations made by several politicians and so called ‘researches’ with no scientific rationale, which stated that the number of victims among Poles increased from year to year. Thus, there was a political put-up job for research of Volhyn topic and for publication of a series of quasi-scientific brochures which obtained considerable funds. Dozens and even hundreds of grants on this problematique were awarded. And then statements in Polish parliament along with decisions of local authorities appeared which resulted in more frequent facts of Ukrainian tombs ruin. As a result, the process developed into numerous facts of phobic elements and chauvinism.

Attempts to show Polish and Ukrainian conflict of the mid-20th century as genocide over Poles is undoubtedly a part of campaign, designed in Kremlin to discredit Ukraine in the face of international community, which involved blear-eyed polish politicians and Moscow agents of influence. Today it is known that it was Kremlin that inspired Polish and Ukrainian conflict during the World War II. That was Kremlin that in the time of Ukrainian President Yanukovich played a “card” of the so-called Volhyn massacres using its agents of influence in the Party of Regions and Communist Party and it keeps feeding imperialistic and revanchist spirits in Poland worsening anti-Ukrainian hysteria.

Ukraine and Poland should have to draw lessons from their previous faults, when the fall of the one state inevitably led to the fall of another. Let’s remind 1686, when at the cost of division of Ukrainian land, Moscow and Poland signed a tractate on “everlasting peace”. And how long have this “eternal peace” lasted for? It lasted for a while and was terminated by three re-divisions of Poland (in 1772, 1793 and 1795). And what about the events of the Ukrainian revolution of 1917-1921, when Polish government having the official agreement with the UPR of 1920 on joint struggle against Bolsheviks, several months after signed behind Ukrainian party’s back separate peace with Bolshevist Russia, throwing Ukrainians to the wolves of Kremlin? A bit later, in 1921 after signing of the Treaty of Riga the territory of Ukraine was divided between Poland and Russia. What then? Ukraine fell, however in 1939 Soviet Russia with Nazi Germany performed the same cynical re-division of Poland.

Both nations should keep in mind these events. We don’t need any additional evidence as history has many times proved – if Ukraine falls today, Poland may fall tomorrow. Hotheads both in Poland and Ukraine should follow a thesis of the well-known Polish poet and translator Josef Lobodowsky on “shaking the offered hand” and his words “if we are distined to disagree in the future, let’s do it at least on ruins of the Moscow Empire.”

For displeasure of the enemies of Poland and Ukraine, the common sense in relationships between two states is increasingly outweighing opportunism, politicking and political prejudice. Recent steps of the leaders of these states who gave the order to prepare for signature a draft of the Road Map on conciliation of nations seem to be optimistic. The document aims to establish a constructive bilateral dialogue and to facilitate the process of mutual understanding between two nations for further strengthening of strategic partnership between Poland and Ukraine. Foundation of the Centre for neighbourliness is being planned. The need to exclude politicization of the issues of common historical past and to focus public attention of both states on positive examples in the history of Polish and Ukrainian relations is being gradually realised.

The policy of mutual understanding will unequivocally ensure natural union of Poland and Ukraine in their struggle with their enemy – Russia. Moreover, their strategic partnership in this difficult period will enhance security of the whole Europe.