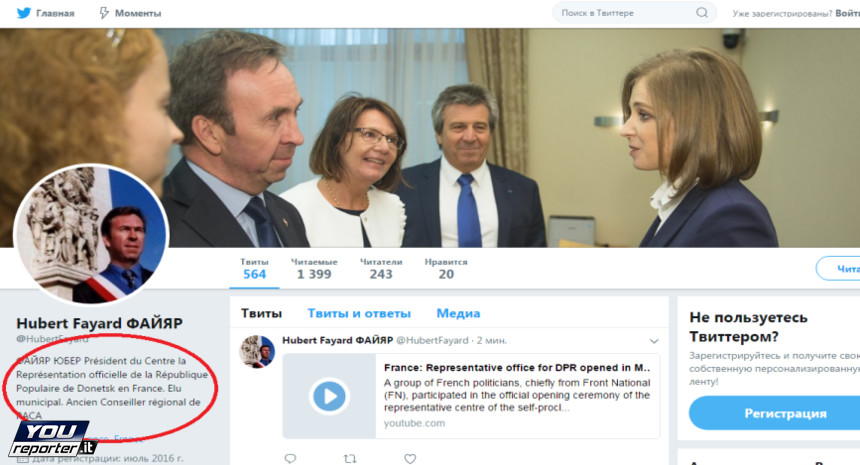 On Sept.25, 2017 the office of so-called “Donetsk People’s republic”, not recognized by Ukraine and international community, was opened in Marseilles. This event was reported to be the first step of diplomatic recognition of self-proclaimed republic. However, the conveners of this “diplomatic” event have forgotten to inform French officials hereof.

There is a quiet interesting fact. In June 2017 Fayard visited Donetsk along with Christine Pujol deputy from “Debout la France” and Christian Borelli from “LR”, where they signed so-called “the treaty on negotiations and opening of DPR office in France”. Mr.Fayard stated this during the press-conference organized by “Donetsk agency news”.

So-called “Donetsk news agency” is the ground for appearances and sensational speeches of representatives of DPR illegal paramilitary forces wanted by Ukrainian and international authorities, and are supported by Kremlin, and of foreign politicians, engaged by Kremlin to promote unrecognized “republics”.

Mr. H.Fayard is such person. He is not only a welcome guest in Russia, but also an active participant of “official” meetings, where we can see those figures, who took part in the annexation of Crimea and Russian invasion to the East of Ukraine. Here, for example, a photo of Mr.Fayard and “Crimean senator” N.Poklonskaya, who was promoted to the post of the “general prosecutor” of annexed Crimea, and later she was given another high-ranked appointments in Russian federation.

The event devoted to openning of fake “office of DPR” was also visited by such well-known french officials as Alexandre Schilling and Philippe Franceschetti, deputies mayor of Marseilles in 6th and 8th districts of the city accordinly.

Other respected french citizens also visited this event: J.Clostermann, the president of the association “My country of France”, and the expert of “Stratpol center” Xavier Moreau (see the picture above). Online broadcast in social networks was done by Sebastien Hairon, journalist and blogger, well-known for his support of pro-Russian separatists in Ukraine and for disgraceful interviews of members of illegal paramilitary forces of “DPR” and “LPR”.

It is quite significant, that inauguration speech of “DPR minister of foreign affairs” was broadcasted online, as all so-called ministers of “DPR” and “LPR” are wanted by Ukrainian and international law enforcement bodies for commitment of worst crimes. And this fact gives quite doubtful nature to the event with participation of French citizens.

It seems to be very unlikely that all listed above French citizens (the country which condemned roundly aggressive Russian actions towards Ukraine and is a member-country in Normand negotiations on peaceful settlements) were not aware of the real aims of this event in Marseilles… Likewise, Mr.Fayard and Mr.Hairon have already visited occupied territories without appropriate Ukrainian visas. They entered occupied territories through the part of border line which is out of control of Ukraine.

It is absolutely clear that political preferences of the participants of this propagandist event, arranged by pro-Russian separatists do not meet the official position of French republic.

It is confirmed by the Ministry of foreign affairs of French republic. By its official statement French authorities stated France did not regard “representative office of DPR” as an institution with a diplomatic status and the acts of French citizens in this regard are going to be investigated by the law-enforcement bodies of the Republic.

It is worth to add that the reaction of French medias towards this event was very poor. Maybe it can be explained by the consensus of French establishment in the regard of Donbas’s status, which is definitely Ukrainian territory. High French official have repeatedly expressed their support to territorial integrity of Ukraine and in the light of the latest events French position is clear: there can be no diplomatic contacts with those who want to separate particular territories from Ukraine and who have committed crimes in the territory of Ukraine.