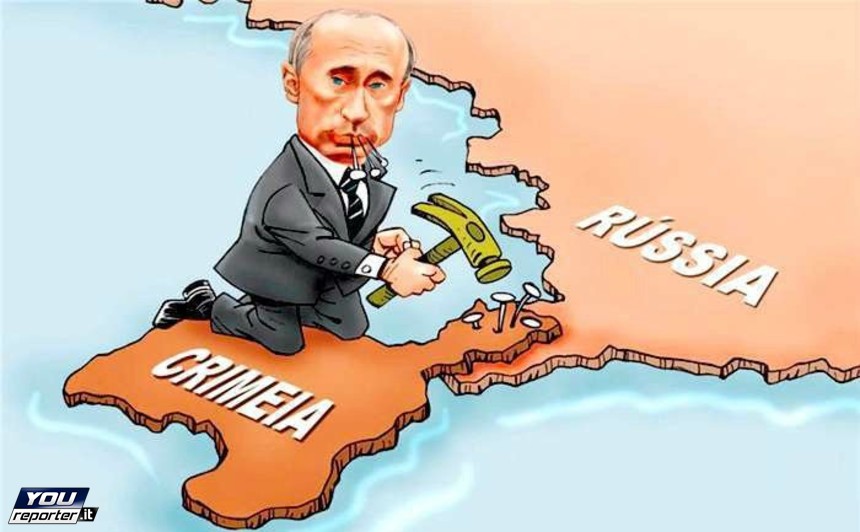 On April 20-22 a well-known Yalta resort in occupied Crimea will invite the so called 3rd Yalta International Economic Forum. Current Crimean “authorities” present this business forum as one of the high-profile events in international economic life. However, as a matter of a fact this event has political nature being called to demonstrate disunity of the Western world in respect of Crimea status.

As it happens, organisers of the 3rd Yalta International Economic Forum (YIEF-2017) represented by the so-called “government of the Republic of Crimea” supported by the administration of the President of the Russian Federation use their best endeavours to expand foreign representation. Prospective participants from 40 countries all around the world received about 1000 invitations. Moscow expects approximately 150-250 foreign politicians and businessmen to visit Yalta this year.

A year ago politicians and businessmen from 25 countries across the world participated in Yalta forum. Yet the crowning organisers’ achievement was attendance at the occupied Crimea of EU MPs. Among the participants of YIEF-2016 were such fervent supporters of Kremlin policy as Marcus Pretzell, representing Alternative for Germany, a right-wing populist party (who was expelled from the European Conservatives and Reformists group in April 2016 following his callings to “shoot illegal migrants”) and Jaromіr Kohlісek, representing the Communist Party of Bohemia and Moravia traditionally favouring to Kremlin. However, no representatives of any reputable foreign company were seen among the forum participants.

It shall be mentioned in this context that G7 states as well as the EU have introduced economic sanctions against Crimea following its occupation by Russia which includes a prohibition to invest in Crimean infrastructure and enterprises and cooperate with local companies.

Despite of this fact this year the so-called “Crimea’s friends” who supported the annexation of the peninsula in 2014 are going to recreate at Russia’s expense again. As a rule, all of them are members of marginal European parties funded by Kremlin. However, the masters of the forum put high hopes on the visit of EU MPs to the occupied Crimea who were invited deliberately to raise the status of the event. Romanian Laurențiu Constantin Rebega and Italian politician Lorenzo Fontana are expected to be among the guests of the Forum. By the way, Italian delegation promises to be one of the most representational as about 50 persons received official invitations. Supposedly it will involve a member of Italian Parliament – Senator Bartolomeo Amidei, politicians, deputies of the regional councils of Veneto (Roberto Ciambetti, Stefano Valdegamberi, Luciano Sandona, Andrea Bassi), Liguria (Di Muro Flavio, Rixi Edoardo) and, naturally, Tuscany (by the way, here is the location of the estate and vineyards of the corrupt Russian Prime Minister Dmitry Medvedev), as well as representatives of the business community of Italy (Bonaspetti Chiara, Rinaldo Vicentini, Maurizio Motta, Campedelli Giuseppe, etc.). The list of guests also includes politicians and businessmen from Austria, Turkey, Finland and other European countries.

Despite of the impressive list (https://goo.gl/DlDUrR) of guests it appears that the visit by the representatives of foreign big business and respectable investors of Yalta forum may not be forthcoming. Moreover, investments are out of the questions as foreign sanctions prohibit foreign companies to run a business in Crimea. Even the only fact of visiting of the annexed peninsula is a grave violation of international and Ukrainian law and those politicians and businessmen who dared to visit Crimea without the permission of the lawful authorities may face economic sanctions.

For the last three years from the moment of the annexation, the international community has not changed its front to Crimea status. Europe and the whole civilized world still treat the peninsula as Ukrainian. That is enshrined in the UN General Assembly Resolution 68/262 of March 27, 2014 which affirms territorial integrity of Ukraine within its internationally recognized borders and calls upon all States not to recognize any alteration of the status of the Autonomous Republic of Crimea and the city of Sevastopol and to refrain from any action or dealing that might be interpreted as recognizing any such altered status (paras. 1 and 6).

Investments in Crimea: myths or reality?

Russian media insistently reports strong interest to the Yalta Economic Forum from foreigners. They mention free trade zone enabling to cut significantly the production cost as one of the principal attractive factors for running business in Crimea. Present Crimea governor Sergey Aksyonov also insists on favourable investment climate calling crisis the window of opportunities for business. He talks dreamily about anticipated construction of roads in Crimea by the Italians and oyster culture by the Frenchmen and consistently proposes potential investors to contact him via official phone number. Inescapable would be the disappointment of those who nevertheless determines running business in Crimea where the off the scale corruption level drives away even the hard bitten Russians. However, the issue is not about merely the sanctions and corruption. Long-term project business needs guarantees and stability and it seems senseless to invest money in territory which is owed to return.

However, Putin’s Russia is used to having no fear in face of Western economic sanctions. At the turn of the previous year the authorities of the annexed Crimea adopted the Strategy of the social and economic development of the peninsula until 2030 which defines as the principal priority achievement of the economic growth through raising the share of hi-tech enterprises and… involvement of foreign investments. The calculations show that the anticipated total investments in economy until 2030 are 438 bln rubles (approximately USD 7,4 bln), while the volume of estimated foreign direct investments is USD 1,98 bln.

As a matter of fact, it is difficult to say what foreign investors are expected in Russia under sanction regime as occupied Crimea is not a territory of top-priority investment even for Russia and still remains a dotation region.