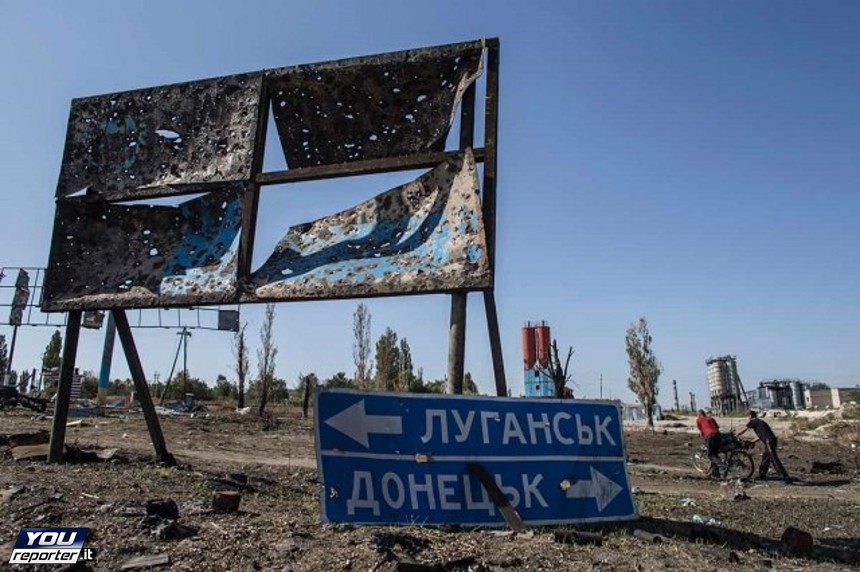 The fourth year of a military conflict in Ukraine has begun. Military developments in Donbas have destroyed both economic and social spheres. Moreover, they cause irreparable damage to environment which may further result in global ecological disaster.

Donbas as the main industrial region of Ukraine has always been ecology-troubling territory. It is caused by high density of potentially dangerous industrial productions. Approximately 900 big industrial enterprises are located in Donbas, including 140 coal mines, 40 metallurgical plants, 7 thermal power stations, as well as 177 chemically hazardous industries, 113 of which use radioactive materials. In addition, the total length of pipelines running across the territory of the region is 1230 km which supply oil, gas and ammonium. That is why today the ecological situation on Donbas has actually got accident scales.

Bellingcat performed its own data independent study of influence of the military conflict on region ecology based on the open source data. Analysts of agency have confirmed that there is a high probability of irreversible consequences not only for ecology of Donbas, but for the neighbor regions as a result of one incautious shell hit of potentially hazardous facility. Some 20 mines were damaged incident to hostilities resulting in release of industrial waste to atmosphere, as well as water and soil pollution. Several chemical enterprises also became the targets of separatists. According to Bellingcat, the list of the most hazardous enterprises includes Avdiivka Coke and Chemical Plant, Dzerzhinsk phenol plant in Novgorodskiy, the filtration stations in Donetsk region – Verkhnekalmiuskaya, Donetsk and Gorlovskaya, Uglegorskaya TPP, Nikitovsky mercury mine plant, Luhansk power station as well as Mikhailovskaya converter station, where approximately 3 tons of mercury are preserved. Actually, one may say for certain that these facilities are the chemical delayed-time bomb, which may explode at any point.

The warfare caused operation breakdown of power lines and electrical substations, which led to general shutdown of mining water pumps. According to Independent Trade Union of Miners of Ukraine, Aleksandr-Zapad mine is being flooded in Gorlovka. Following an accident, 50 tons of highly poisonous element – mononitrochlorbenzene – fell in it in 1989. If the waters crop up, radiation level will exceed acceptable limit one thousand times, posing threat equitable to a new Chernobyl. The precise number of mines being flooded is currently unknown. There is information only about seven mines operating in anti-terrorist operation zone. Information is available about full or partial flooding of Butkovskaya and Yasinovka-Glubokaya mines in Makeevka, Mospinsk mine, Trudovskaya and Oktiabrskaya mines in Donetsk, Belorechenskaya mine in Lutuginskiy district of Luhansk region, Melnikov mine in Lysychansk, Komsomolets Donbasa mine of Kirov district, Donetsk region, Vakhrushev mine in Rovenky, Korotchenko mine in Selidovo, destroyed Progress mine in Torez, Krasnyi Partizan mine in Sverdlovsk, Ilovaiskaya mine, Volynskay mine in Rassypnoye, full flooding of Mashynskiy block mine, Maria Glubokaya mine in Pervomaisk and Enakievskaya mine. Only immediate pumping of poisonous mining water may prevent mixing it with ground fresh water. It is a well-known fact that ground water quickly run through extensive territories. As a result, extensive territories and water resources may be poisoned. In addition, according to available data, the fighters made mass graves from disused mines. Therefore, spring may bring epidemic of hepatitis and other infections.

One should realize and grasp that liquidation of ecological disaster in wartime, if any, is practically impossible, while the following problems and aftermath will become a heavy burden for citizens of occupied territories.

Ukraine in its aspiration to avert impending disaster has repeatedly focused attention on the urgent need to bring up the issue of finding solution to ecological problems across the territories of Donetsk region for discussion of tripartite contact group in Minsk. The world community becomes realizing and apprehending the importance of ecological disease preventing as is evidenced by more frequent visits of representatives of international organisations to Ukraine. It is evident, that urgent measures to prevent vast ecological disaster and humanitarian crisis in region are necessary. It is also necessary to increase number of observers and to secure OSCE Special Monitoring Mission’s work, to intensify work of tripartite contact group (Ukraine, Russia, OSCE) and to do all possible to stop the armed confrontaion in potentially dangerous industrial region.