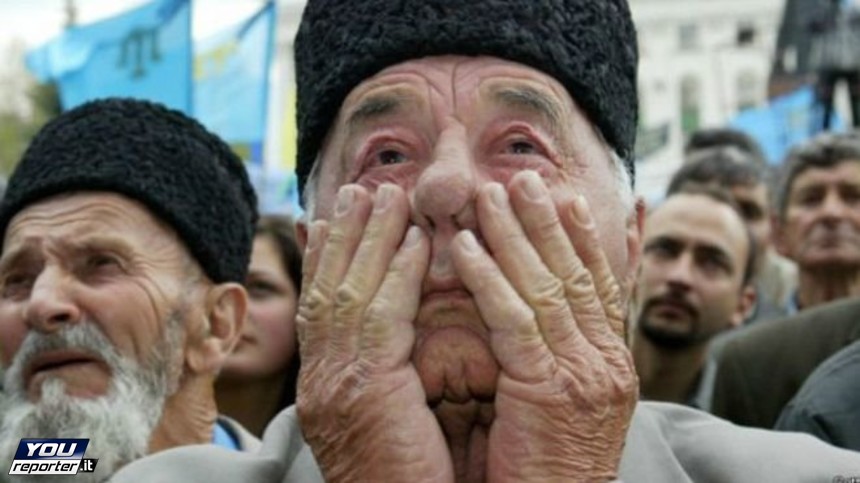 A tragic date in the history of Crimean Tatar people is drawing close – an anniversary of deportation of Crimean Tatars. This tragedy in its inhumanity can be equated to genocide of the indigenous people of Crimea. By an order of the leader of the Soviet Union Joseph Stalin on May 18, 1944 all Crimean Tatars were loaded into freight cars and removed to Central Asia and Siberia. Those who offered resistance and refused to leave their homes were shot in sight, others, who removed in the appointed time, were loaded into barges and flooded in the Black Sea. Totally about 200 thousand Crimean Tatars dead or were deported at that time.

The process of repatriation of the indigenous people of Crimea began from 1990s only, following the collapse of the Soviet Union, after Ukraine in which Crimea exists as autonomy became independent. However, even more than twenty years later not half of Crimean Tatars succeeded to return home.

Today, after annexation of the Crimean peninsula by Russia, people who have suffered a lot face a new threat of forced deportation. It worth paying tribute to present Russian authorities that improved significantly methods of treatment of political undesirables. It seems that former KGB experience of President Vladimir Putin and other Russian officials bears its fruits. Today people are not still loaded into the freight cars and moved thousand kilometers away. To that end another, more sophisticated methods are developed which force Crimean Tatars to leave recently obtained native land voluntarily. This refers to restriction of rights and freedoms of national minorities at the occupied peninsula, brutal violations of the freedom of speech, associations, conscience, and repressions in respect of civil activists. These restrictions refer primarily to language, religion and culture.

Ukrainian- and Tatar-medium schools are closing at the occupied peninsula. Crimean Tatar channel ATR and Avdet newspaper lost their license and were closed, members of their editorial boards were forced to leave the peninsula. The authorities banned mass-meetings and memorial demonstrations, particularly traditional commemorative event on May 18 and joint pray for lost family members and relatives as almost each Crimean Tatar family suffered during Stalin deportations. Crimean Tatars confessing Islam are even forbidden to gather for joint pray and reading of religious texts as security services often conduct searches in mosques and households of Crimean Tatar activists searching for the so-called forbidden religious literature possessing of which may cause arrest and conviction. Those who dissent with annexation are forced to change their citizenship to Russian.

It worth laying special emphasis on prohibition of Mejlis activity, which is a representative body of Crimean Tatar people. The so-called Supreme Court of Crimea recognized Mejlis as extremist organization and forbid its leaders Mustafa Dzhemilev and Refat Chubarov entering the peninsula.

During the time of Crimea annexation a score of Crimean Tatar activists were missing, tormented, arrested or convicted on contrived charges. General public well knows the names of Reşat Ametov, Timur Shaymardanov, brothers Islyamov, Edem Asanov etc. This list is consistently refilled with new names. The so-called defense volunteer squads which in fact consist of conventional ruffians entitled to outrage, as well as authorities and security services consistently threaten relatives of murdered and missing persons.

Despite the facts of violation of the rights of national minorities registered by international observers Russia keeps impudently and cynically telling lies to the whole world about improvements of the state of national minorities and Crimean Tatars in Crimea. Thus, for example, Head of the Federal Agency for Ethnic Affairs Igor Barinov in his April speech for the Information Committee of the UN General Assembly declared that Crimean Tatars for the first time after the so called Crimea’s accession to Russia may feel the difference. He says Russia gave Crimean Tatar language official status (along with Russian and Ukrainian), affords obtaining degree in native language, celebrating national holidays, provides with housing etc. Russian official even invited the participants of the conference to visit Crimea in order to be clear about it. However, Mr. Barinov didn’t mention those thousands Crimean Tatars and Ukrainians who didn’t wish to change their national status and were therefore forced to leave Crimea pulling through repressions, those hundreds of arrested on political charges, those dozens of missing and massacred for three years of annexation.

He didn’t mention also that Russia disregarded the decision of the International Court of Justice which obliged Russian authorities to resume activities of Mejlis. The Ministry of Foreign Affairs of the Russian Federation immediately announced the decision of the Russian authorities claiming that Crimean Tatars supposedly become integrated in social and economic area of the state successfully. Russian officials traditionally reject any charges in prejudicing the rights of national minorities even despite of the fact that the delegation of the Council of Europe reported registered facts of repressions against Crimean Tatars and Ukrainians after recently returned from Crimea.

Thus, why present authorities are afraid of Crimean Tatars so much? It seems that several dozens of hundreds people may not pose a serious threat to Russian regime. At the same time it is important to note that Crimean Tatars who have fought for their right to live on native land for decades are notable for unity and high level of self-organization. For a good reason Kremlin bewares of this small yet unbowed nation which may offer resistance to regime attempting to deprive it of native land once again. That is why Russia makes everything possible to force Crimean Tatars to leave their historical homeland or put behind their national identity fully dissolving in the “Russian world” which put down roots in Crimea.

Crimea annexation and the conflict in the East of the country made displaced more than 2 million of Ukrainian citizens. Therefore, today only joint efforts of international community may determine whether another 200 thousand Crimean Tatars who still stay in Crimea will become refugees.